On the world no tobacco day of 2020 Stowelink participated in a continent wide campaign which was culminated by the tweet chart between our founder Mr. Ogweno Stephen and the Food and Genes Initiative from Nigeria. The purpose of this tweet chart was to answer critical questions that had been collected over the world no tobacco week and other activities that were conducted in preparation for this day. Below are the questions and answers that were provided during this informative and timely tweet chart. 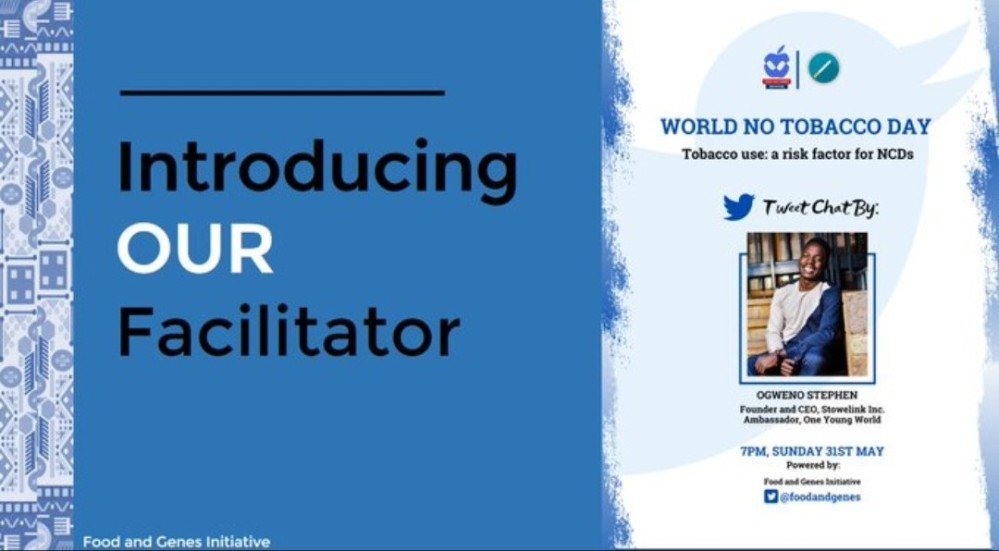 OGWENO STEPHEN (@stevenstowel) is a Population Health expert and the founder and CEO of @stowelink_inc. He is @OneYoungWorld ambassador and the brain behind the #365NCDs Campaign.@stevenstowel has been recognized time and again as a leading voice in innovation and in the development of successful programmes and projects that are centered on NCDS literacy.

QUESTION 1: WHAT ARE #NCDS 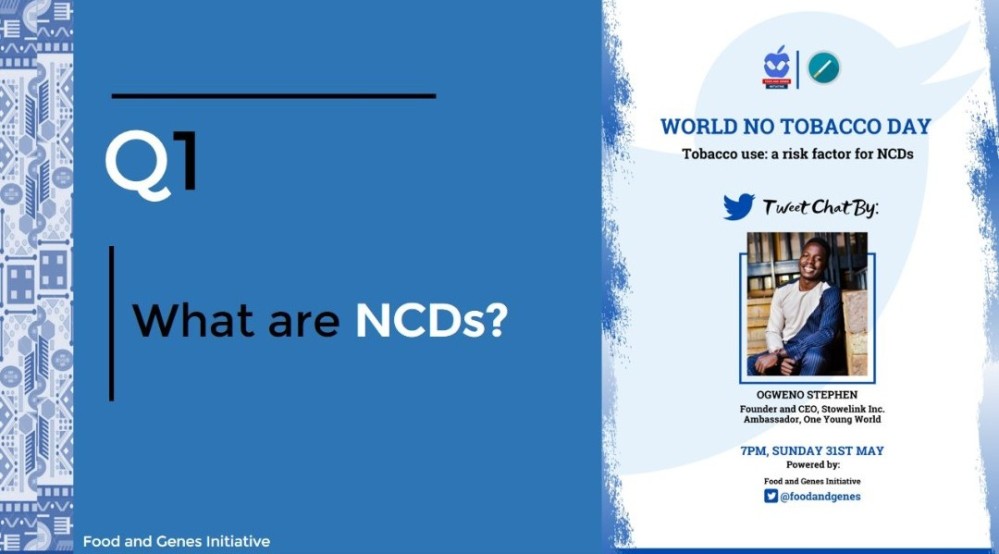 Non communicable diseases, are diseases that cannot be transferred from one person to the other are often long term/ chronic. These diseases include, cancer, diabetes, obesity,heart diseases,chronic lung diseases and mental health. these diseases are the leading cause of deaths globally with 70% of deaths occurring in low and middle income countries. Leading risk factors for NCDS include tobacco use, alcohol use,  physical inactivity, poor diets and environmental exposures.

QUESTION 2: WHAT IS TOBBACO AND WHERE CAN IT BE FOUND? 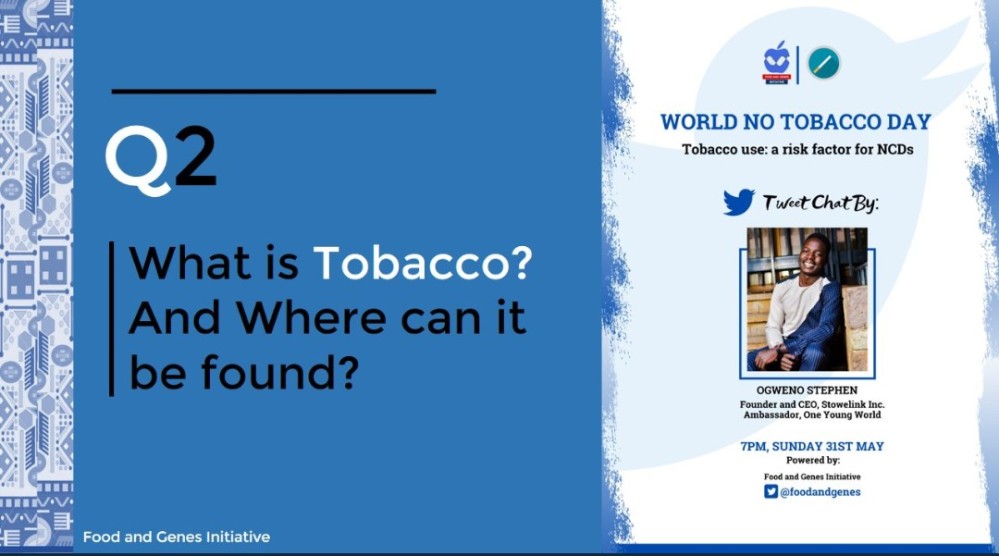 Tobacco is the common name of several plants in the Nicotiana genus and the Solanaceae (nightshade) family, and the general term for any product prepared from the cured leaves of the tobacco plant. Tobbaco is all around us in various forms including: Smoked tobacco products IE.cigarettes, cigars, kreteks. Some people also smoke loose tobacco in a pipe or hookah (water pipe). Chewed tobacco products include chewing tobacco, snuff, dip,and snus; snuff can also be sniffed.

Generally, tobbaco products are found in these 6 categories:

QUESTION 3: HOW MANY PEOPLE DIE YEARLY AS A RESULT OF NCDS DUE TO TOBACCO USE? 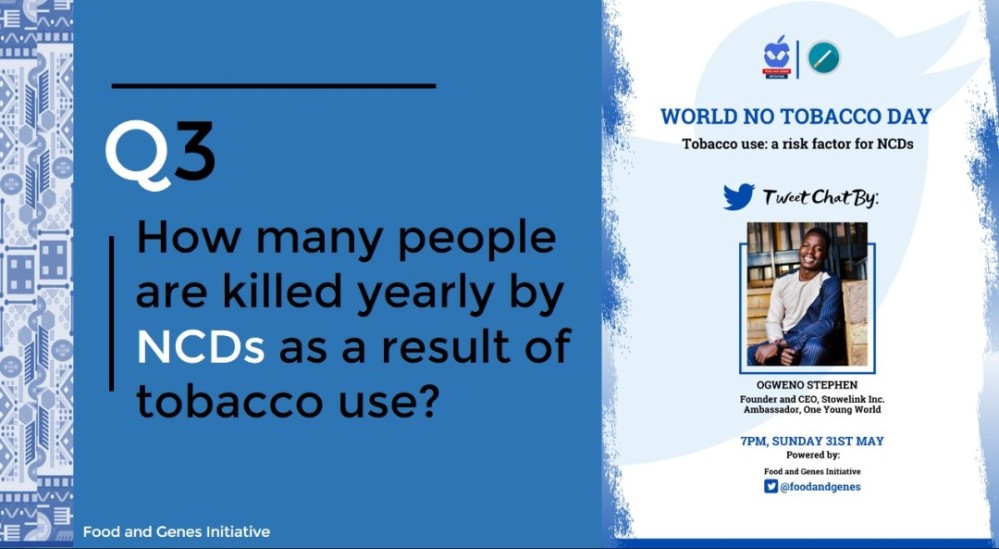 QUESTION 4: HOW DOES TOBACCO LEAD TO NCDS? 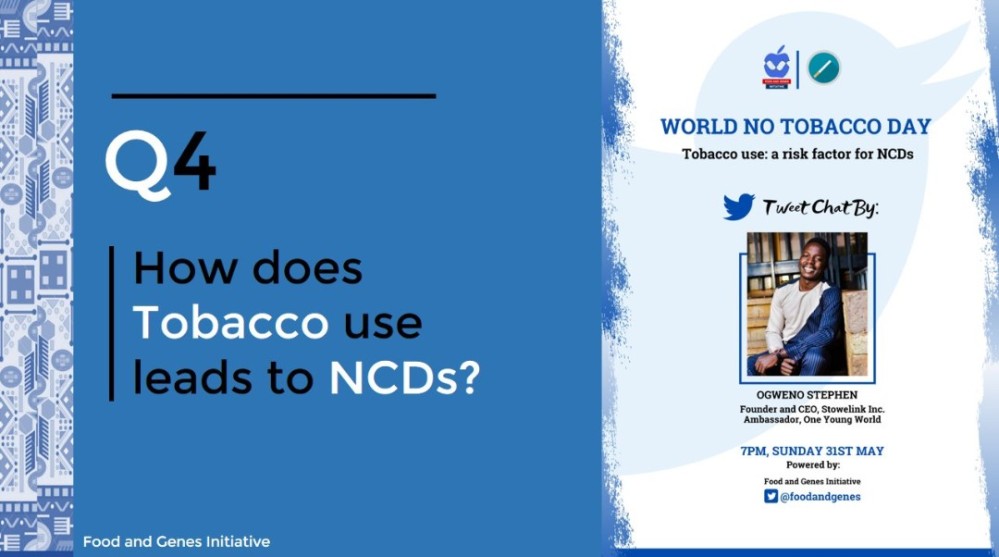 Smoking can cause cancer and then block your body from fighting it: Poisons in cigarette smoke can weaken the body’s immune system, making it harder to kill cancer cells. When this happens, cancer cells keep growing without being stopped. Poisons in tobacco smoke can damage or change a cell’s DNA. Smoking is the single largest preventable cause of heart disease . Tobacco smoke contains high levels of carbon monoxide. Carbon monoxide affects the heart by reducing the amount of oxygen the blood is able to carry.this leads to various hear diseases

When you breathe in cigarette smoke, the chemicals irritate and activate certain white blood cells (macrophages) and cells that make up the lining of the airways (epithelial cells). This causes the cells to release multiple types of cytokines, which are small signaling proteins that cause the airway lining to thicken and airways to become inflamed.

The persistent airway inflammation caused by cigarette smoke can cause a cycle of injury and repair that changes the structure of the airways and makes them narrower. Cigarette smoke also induces a cascading effect that results in certain cells producing more mucus than normal. Almost all major NCDS are linked to tobacco because of its many chemicals which interact with various parts of the body differently causing harm to the structure and function of the body cells.

QUESTION 5: WHAT ARE THE REASONS WHY PEOPLE TAKE TOBACCO? 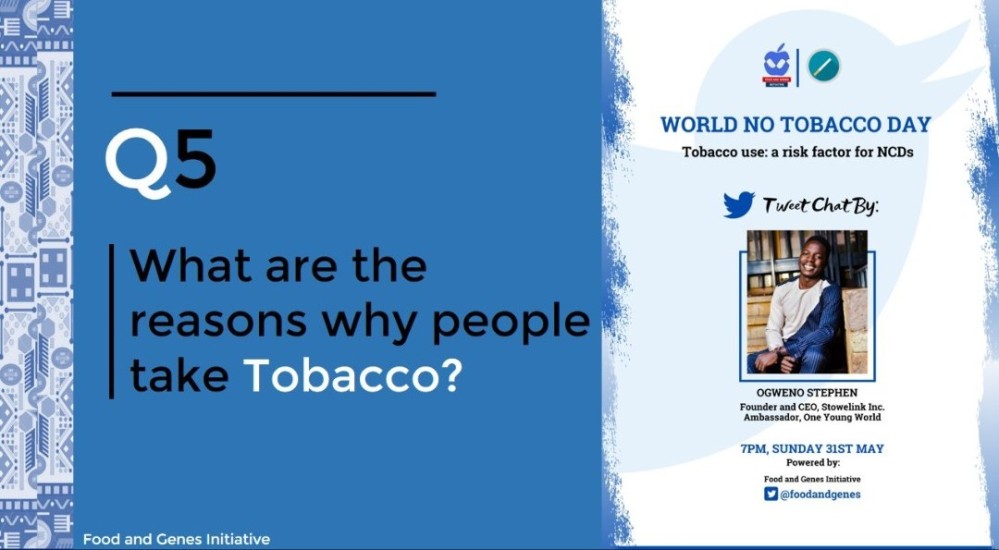 People say that they use tobacco for many different reasons—like stress relief, pleasure, or in social situations.

– People also smoke because of peer influence Some teens say that they “just wanted to try it,” or they thought it was “cool” to smoke.

QUESTION 6: HOW DOES ONE FIGHT THROUGH TOBACCO ADDICTION? 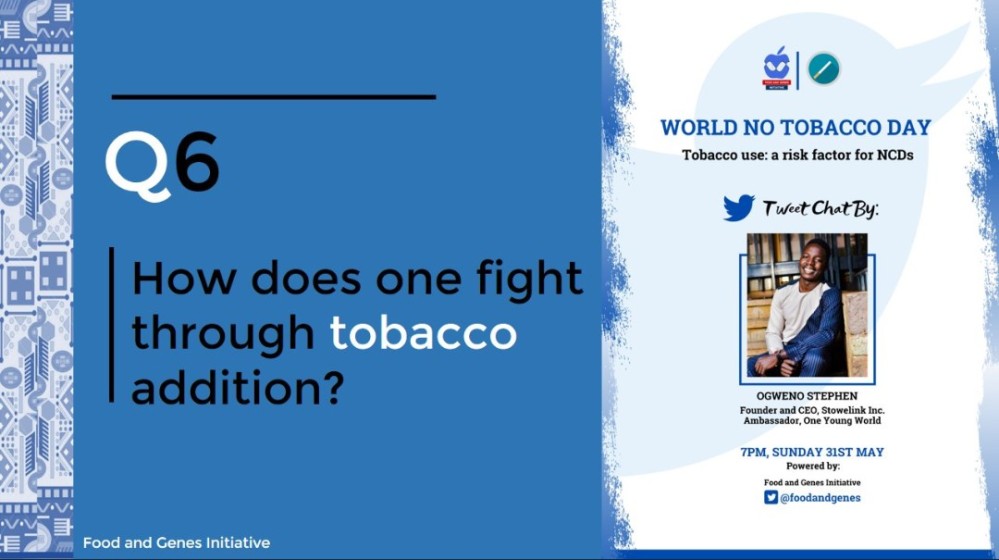 QUESTION 7: WHAT ARE THE POSSIBLE IDEAS WE CAN USE TO REDUCE TOBACCO USE AMIDST YOUTHS AND TEENAGERS. 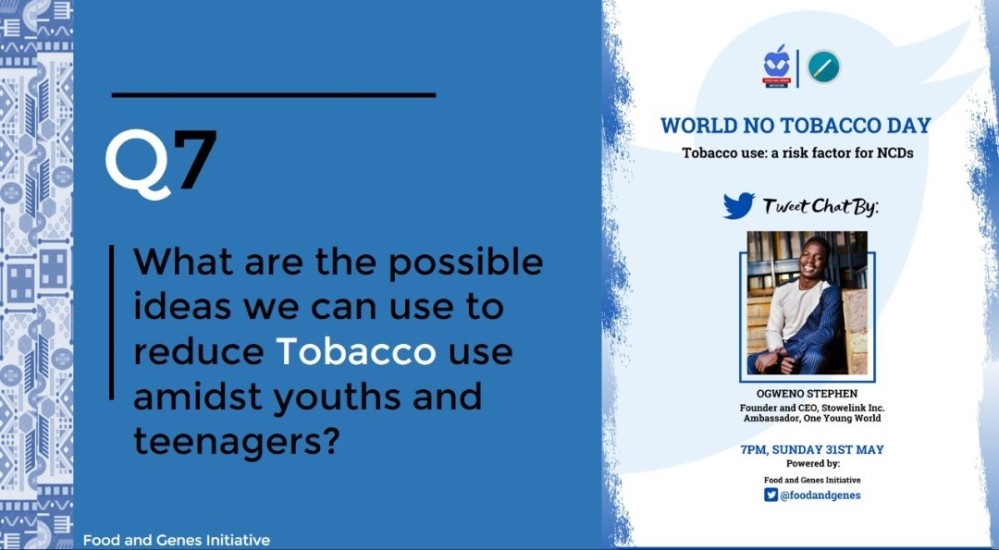 Reducing tobbaco use amount young people will require a mix of national, local and personal efforts both implemented together in a coordinated effort in a bid to fight off all the advances of tobbaco industry to get youths to use drugs. Such interventions include:

QUESTION 8: WHAT ADVICE CAN YOU OFFER PEOPLE CURRENTLY TAKING TOBBACO? 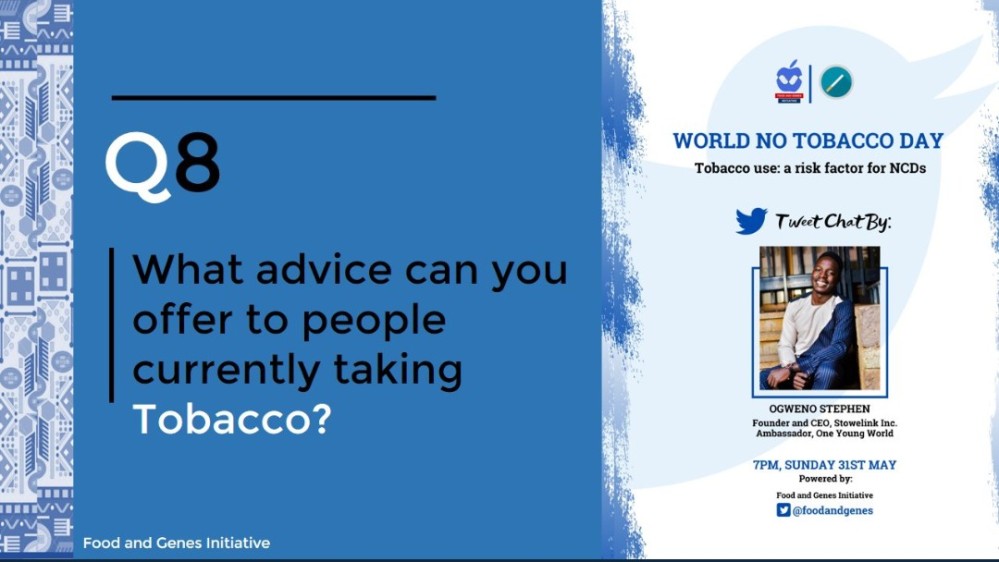 If you are a current user of tobbaco, you have to realize the urgent need to stop smoking. Tobbaco affects not only your health but also your finance, your social life’s, your productivity and therefore if there is any better time to decide to stop the time is now. As a current user of tobbaco willing to stop, visit local clinics and rehabilitation centers for free and guided approach to therapy on quitting tobbaco use. Therapists are waiting for you if you could only visit them, they are willing to lead you to this new journey to quit . 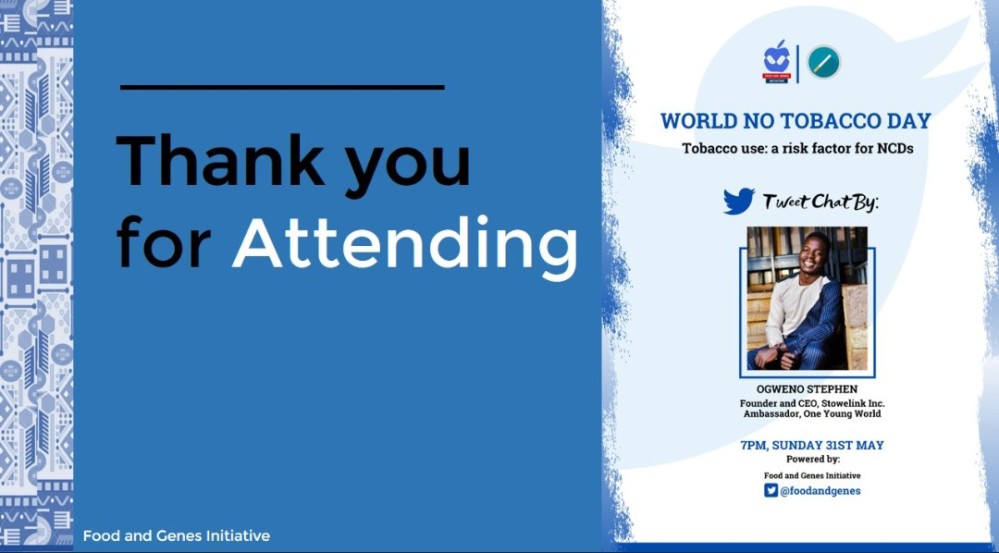 REMEMBER-if you want to support Stowelink Inc and our various projects, if you want collaborations with us or if you want to reach us you can reach us directly through the following contact addresses.