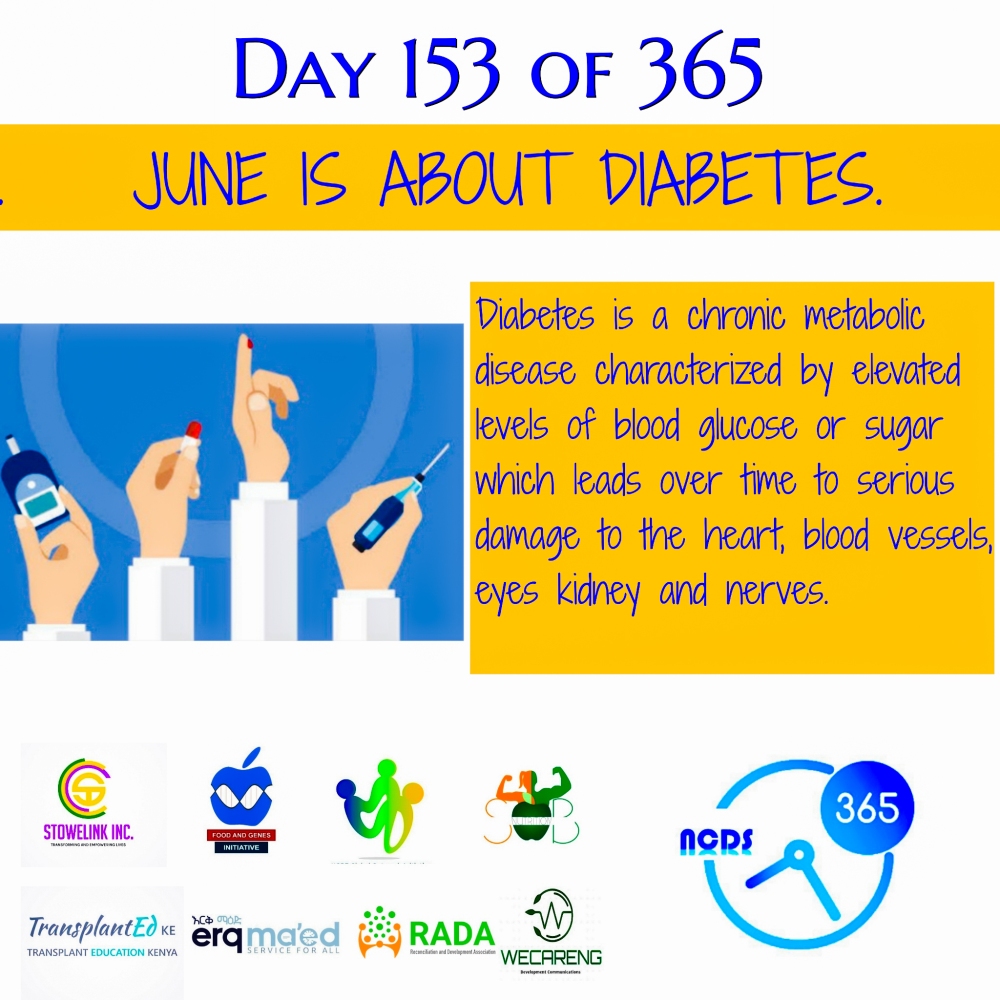 Many people do suffer from diabetes which is a condition that affects the body’s ability to use blood sugar for energy. When the pancreas is not producing enough insulin or the cells of the body is not responding properly to insulin, such an individual is suffering from diabetes.
Insulin is a hormone that comes from a gland situated behind and below the stomach (pancreas). It should be noted that ‘Diabetes is like termites, in that it is slow, hidden, but does significant damage in the body’. It is very important to educate the population about this silent killer called diabetes which is one of the non- communicable diseases.
Glucose is an important source of energy for your body and it comes from carbohydrate foods that you eat such as rice, bread, pasta, cereals, fruits, vegetables, milk and yoghurt. (GLOBAL REPORT ON DIABETES –WHO, National Diabetes Services Scheme)

Diabetes is one of the most common NCDs globally. It is the fourth or fifth leading cause of death in most high income countries and there is a substantial evidence that it is epidemic in many economically developing and newly industrialized countries. (Ncds alliance)
Many people suffering with diabetes are vulnerable to other NCDs related disease such as blindness, heart attack, stroke and lower limb amputation, gum diseases, vision problems. Early diagnose of diabetes will go a long way to prevent other NCDs related diseases.

An estimated 5.1million people died of diabetes related complications in 2013.
17% of babies in 2013 were born to women with high blood sugar levels, which is a sign of gestational diabetes.
The equivalent of 548$ billion was spent on health care for diabetes patients around 2013.
In 2019, more than 1.1 million children and adolescent are living with type 1 diabetes.
Diabetes caused at least USD 760 billion dollars in health expenditure in 2019- 10% spending on adults.
Type 1 diabetes affects about 10%-15% of all people living with diabetes.

Non communicable diseases such as diabetes are often associated with industrialized countries, and communicable diseases with developing countries. In the past this division was partly justified, but as a result of globalization and urbanization the prevalence of this disease is rising rapidly also in low and middle income countries.
Today it is known that out of 400 million people with diabetes worldwide, over 300 million live in developing countries (international federation of diabetes)
People started eating more of imported foods and moving less due to globalization and industrialization.

Day 157 of 365: COUNTRIES SUFFERING MORE WITH DIABETES IN THE WORLD 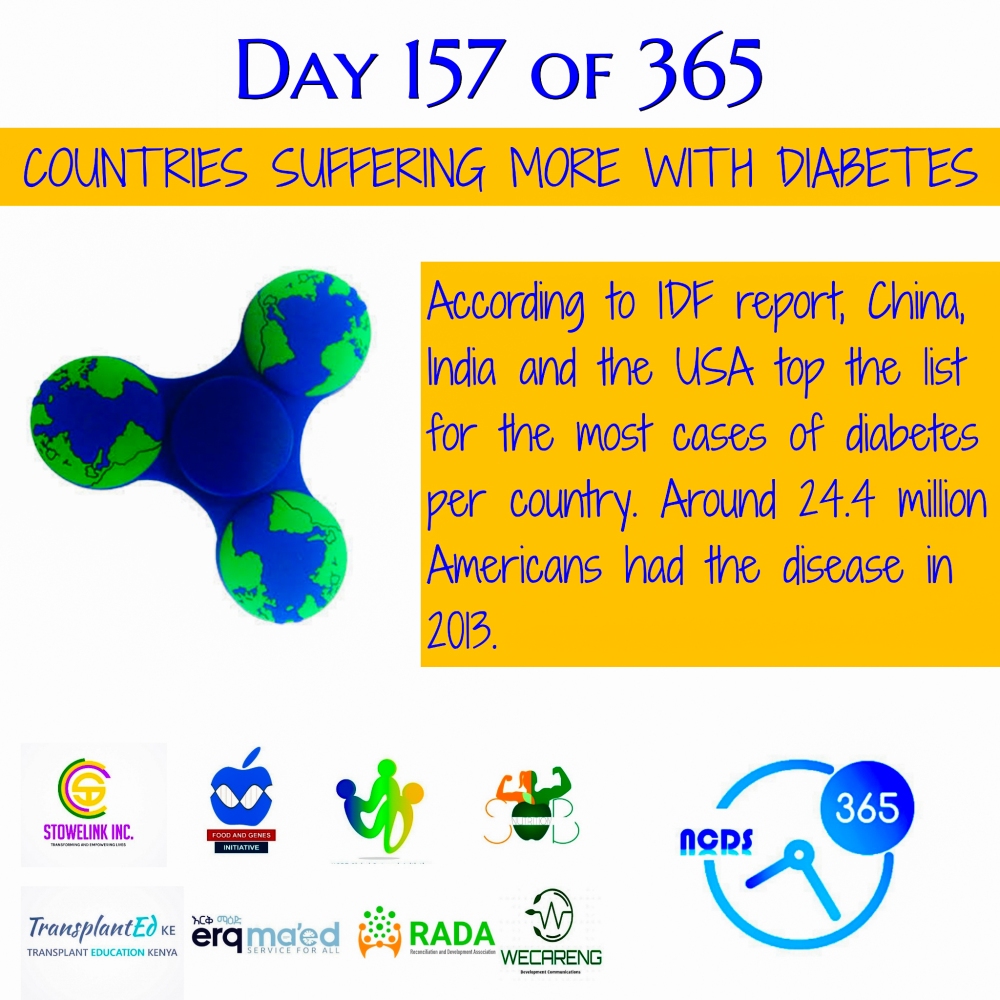 China is the country with the highest number of diabetics worldwide, with around 116 million people suffering from the disease. By the year 2045, it is predicted that India will have around 134 million people with diabetes.
Death from diabetes
Diabetes is one of the leading causes of death worldwide, accounting for 1.6 million deaths in 2016. Diabetes at least doubles one’s chance of dying prematurely and many places in the world lack appropriate treatment options. The highest number of deaths from diabetes comes from South East Asia, where almost 592,000 people died from the disease in 2019.

There are many types of diabetes but we shall focus on three most common ones.
Type 1 Diabetes: Also called Juvenile diabetes because it mostly affects children. In this cases, the body is not able to produce insulin that helps in the metabolism. The patient has to be injected with an external source of insulin. You can think of it as not having a key.
Type 2 Diabetes: It is also called Adult onset diabetes. In this case, People with type 2 diabetes don’t respond to insulin as well as they should and later in the disease often don’t make enough insulin. You can think of this as having a broken key.
Gestational Diabetes: This is when a woman has higher than normal blood sugar levels during pregnancy. It may resolve after pregnancy but is usually not a good sign and steps have to be taken to support the woman in preventing Type 2 diabetes.
90% of diabetes cases are type 2.
Ref. Healthline.org

The increased prevalence among younger individuals suggest that diabetes will become more common in the working-age group. Consequently, employment and work productivity of individuals with diabetes are important issues for patients, family, employers and policy makers. Diabetes can affect employment in a number of ways,
It is said that diabetes has a profound negative effect on economic productivity due to early retirement, increase sick days, disability and mortality.
Individuals who are diabetic sometimes face employment discrimination due to their condition.
This is aside the re-allocation of often meager family resources for care and treatment/management costs.
Ref. American diabetes Association:

Day 160: How Diabetes affects the body 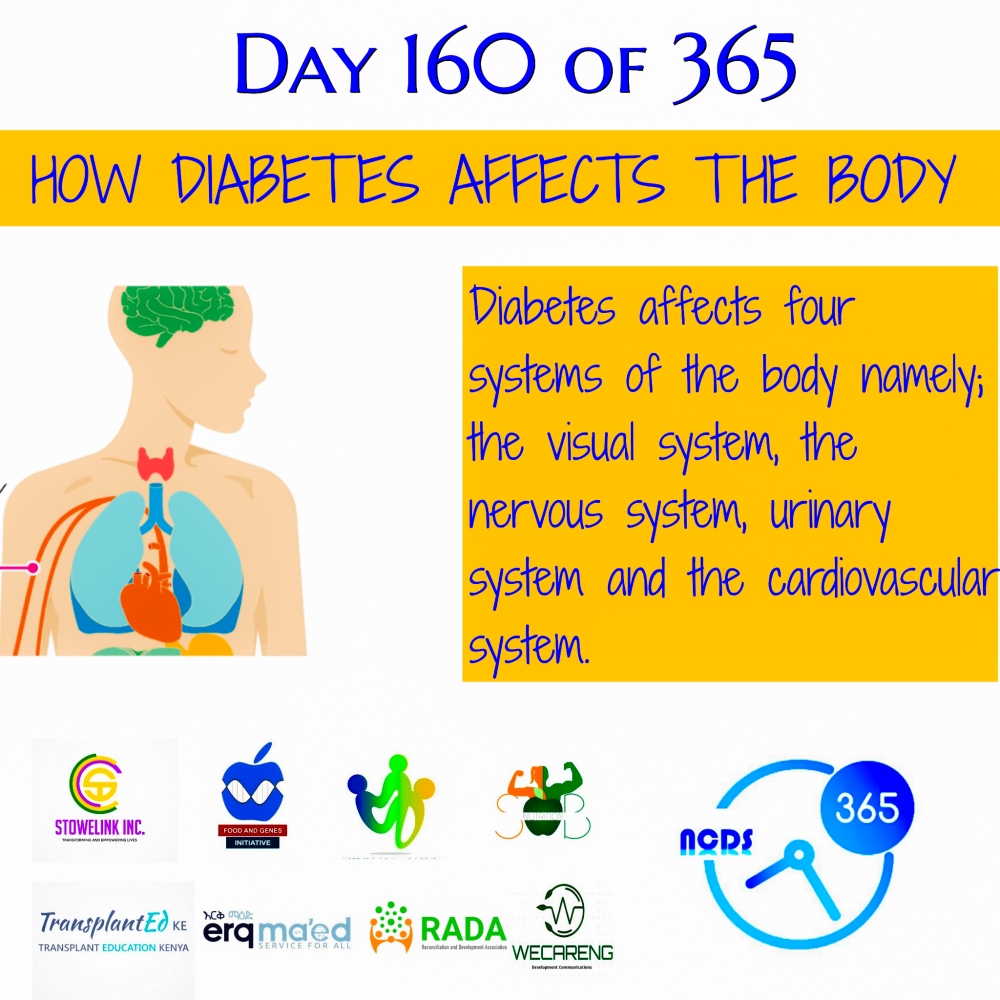 The cardiovascular system includes the heart and blood vessels
The nervous system (nerve damage) called diabetic neuropathy is common in people with diabetes. It is most common in the legs and feet. According to a 2005 statement by the American Diabetes Association, up to 50% of people with diabetes have peripheral neuropathy. This typically starts as numbness that progresses to loss of pain and heat and cold in the feet or hands, making it difficult to sense injury.
The Visual system: which is made up of the eyes is caused by high blood sugar levels leading to blood vessel damage and fluid leakage in the vision-sensing part of the eye called the retina.
In 2011, the Centers for Disease Control reported that diabetes was the primary cause of kidney failure in 44% of people newly diagnosed with the condition. High levels of blood sugar can damage the kidneys.