BELOW IS A SUMMARY REPORT OF WHAT HAPPENED AS PRESENTED BY FELIX OCHIENG.

OBJECTIVES OF THE OUTREACH.

Nyamasaria Secondary School is a mixed day school located in the outskirts of Kisumu town at Nyamasaria estate. We were interested in reaching out to this institution because being situated in a slum, the teachers and students encounter or experience a number of challenges while in and out of school e.g. rape and domestic violence. This is because of the high crime rate associated with slum areas.

The introduction was done by Miss Pamela who gave a brief highlight about Kisumu Peace Makers, its objectives, mission and vision. She then went ahead to introduce the team and facilitators of the day.

The first topic of the day was on gender based violence. This was handled by Mr. Felix Ochieng. Gender based violence here refers to any physical, emotional or psychological oppression that is inflicted to a person on the basis of their gender/gender roles. The prevalence of gender based violence cases has gone high in the current society, women being the most affected though men in some cases are also victims. It is also one of the contributing factors to the spread of HIV/AIDS through defilement and rape cases. The students and teachers were enlightened on the forms of gender based violence which include;

From inquiry and interaction with the audience, it was realized that such cases are rampant in the society and many victims end up suffering in silence because they don’t know where to report to or feel they may not get appropriate help when they open up. There are GBV centers equipped with professional counsellors which are currently being located in every National or referral hospital in every county. There are variety of services offered at these centers which are all free of charge. These services include counselling, HIV test and pregnancy test for rape victims, provision of pre-exposure prophylaxis (PREP) and post-exposure prophylaxis (PEP), suing of perpetrators in cases of rape and defilement, linkages with paralegals to represent them in courts for those who cannot afford lawyers and linkages with safe homes for those who cannot continue staying at their homes because of unavoidable reasons.

PREP – drugs given to someone before engaging in an activity that may put them at a risk of an infection e.g. unprotected sex. These drugs should be taken 7 days before one engages in the act and even after the act, one should continue taking the drugs.

PEP- drugs given to someone after exposure to an activity that can expose them to risk of infection e.g. rape case or unprotected sex.

There was more focus on rape because it is a case in which most of young girls and adolescents fall victims and in most cases, the perpetrators are always people who are closely related to them. These may include friends and family or close relatives. For this reason, he shared with them the Dos and DONTs when one is raped. These include: 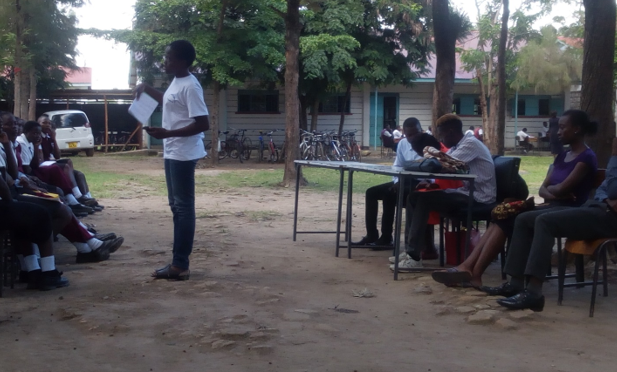 Report to the nearest hospital or police station.

Report to the hospital before 72 hours elapses.

Do not comb your hair.

Do not go for a short call.

Do not remove anything that was at the scene of action.

The reason why one should report to the hospital before 72 hours elapses is to be given PEP to help prevent pregnancy and HIV/AIDS.

N/B Do not trust anyone with your private parts because anyone can be a perpetrator of rape. Private parts are private as the name calls it.