The second phase of presentation was handled by Miss Velma Ooko.

As at now, you realize that awareness on this disease has been made such that almost everybody knows about the disease. This has been achieved through the media, public awareness campaigns and workshops. The only thing that remains to be stressed or majored on is encouraging people to go for testing and know their status and sensitizing people on the importance of knowing their status. This is exactly what we are doing. The audience was sensitized on the importance of knowing ones status such that if you find yourself negative, you continue keeping safe from anything that can lead to contraction of the disease.

If one finds him/herself positive, then he should start taking medication immediately. Knowing ones status also enables one to live a confident life without doubting him/herself.

Those who are living with the disease should always visit the hospital to see the doctor to guide them on better ways of living like observing their diet and also to collect their anti-retroviral drugs. (ARVs)

They should also visit the hospitals to attend the support groups which is a program initiated by hospitals to enable those who are living positive to meet one another and share on how they can live positively and also to encourage one another.

CD4 cells are the white blood cells that help in fighting the HIV virus.

Viral load refers to the quantity of virus in the body.

If one takes the drugs properly and at the prescribed time, it reaches a point that viral load reads 0 and at this point one has the virus but he cannot pass it to another person.

If one does not take the drugs as prescribed, the viral load increases and this is the point where the disease AIDS comes in and now at this point, one is said to have HIV/AIDS.

At this stage, one can always transmit the disease to another person when he/she has unprotected sex.

Stigma refers to any action or activity that makes a person feel unwanted, odd or discriminated in the society.

This one involves the infected, affected, friends, colleagues and every other person that the infected interacts with. An infected person needs to accept him/herself and avoid living in denial. He/she should feel free to interact with people, visit the hospital and take medication on time.

The affected, friends and other people should avoid stigmatizing the infected persons by not talking ill about them, by giving them company, reminding them to take their medication on time and engaging them in their daily activities. 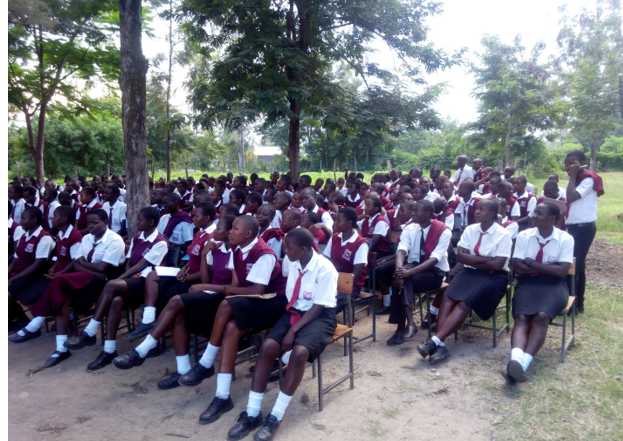 The infected individuals should maintain a balanced diet to boost their body immunity and help them keep fit. This will help in prolonging their lives by boosting the drugs activity on the body.

After the presentation session, there were questions from the teachers and students and they were responded to appropriately.

Below are some of the questions that were highlighted.

What has the government done to curb gender based violence?

What are NGOs doing to help victims of gender based violence?

Why some communities are still practicing FGM and what has been done to save the girl child who is still subjected to this.